q&a: with Dallas Clayton, author of An Awesome Book 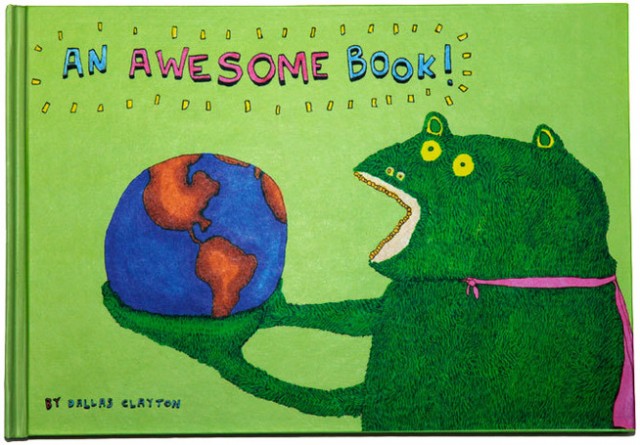 We love anything that encourages dreaming big. Every day we read the stories of makers who see a way to create something better and strike out on their own to prove it can be done.

An Awesome Book combines both. Dallas Clayton wrote a book for his 6-year old son to encourage his fantastical imagination, and in the process found that there are people all over the world, of all ages, who love being inspired to dream without restraint.

Dallas shares his experience in this 3min video:

More in our interview with Dallas, after the jump.

We asked Dallas a few questions…

When you’re thinking, concepting—do the words come first or the art? Do writing and illustrating provide you with a balanced creative experience or is one your first true love?

I’m definitely a writer first. I never really drew anything before An Awesome Book. I just didn’t know anyone else who would draw it and I thought “well, kids won’t know if I’m not any good at drawing” and I gave it a shot. As it turns out, people were stoked. Then i just kept going. Now I have this whole additional career, like “Surprise! You’re also an artist!” It’s rad.

You have a DIY mindset; you made zines when you were young and mentioned in your video that you were able to make the tour whatever you wanted it to be because you did it all yourself (the book sales). With the continued success of your book, are you finding DIY on a larger (and rapidly growing) scale to be as fun as it was when you were just bringing a new idea to life?

I think I will always be excited about doing things myself. That’s how you learn things. Trial and error, figuring out what works and what doesn’t. Honestly there are already so many things in my life that I don’t know how to do—fix a car, rewire a house, build a bathroom—the fact that I don’t know how to do those things bums me out. The fact that I have to hire a mechanic bums me out. That’s not fun. I want to be able to do that myself. And it’s the same thing with the book, I love being able to know how and when things are working or not working, and with each step what goes into making things work better. Even though the book is finished there are still new things to learn every day, which is definitely exciting.

The Awesome Puppet Show looked like an amazing way to recreate your message—are there any other adaptations? Any you’ve dreamed of and want to throw out there, encourage somebody to create?

Well I live in Los Angeles, so obviously there is constant talk of licensing and adapting. There are a lot of really rad projects on the horizon. I’m just trying to do as much as I can and still have maximum fun. And yes, I encourage anyone to create anything they want relative to what I’m doing. Whatever inspires them.

Was there a specific catalyst in your son’s life that made you want to take an active role in inspiring him to keep dreaming?

I think just his existence and his purity. There’s a lot of magic in the mind of a child and conversely a lot of pressure from the outside world slowly wearing away that magic with each and every day they grow. I just wanted to go as hard as possible in the opposite direction in hopes of saving as many magic moments as possible.

Can you share any specific stories that have stuck with you about how An Awesome Book has impacted someone’s life?

So many it’s hard to pinpoint. I get a lot of emails from people, adults, who tell me that they were inspired to revisit a dream they’d give up on, or go back to chasing something they thought was impossible. Lot’s of touching notes from people who are sick or in the hospital but still fighting and hoping and dreaming. People who want to write their own books. Kids who are still in school writing me to tell me how much they hate reading but how stoked they are on what I’m doing. – Ha. Those kinds of things, well you can’t really measure how awesome those are to me.

How does your Awesome World Foundation choose who to give the matching copies to?

Right now the method has more to do with incoming calls than outgoing. I get a lot of emails, so the tricky part is just mapping. Figuring out where people are located and how I can visit the most places and spend the most time with the most kids. In the coming year I anticipate things getting a lot larger at which point I will probably implement a full blown mapping/scheduling system for all of the places I need/want to go in the coming years. This would fall under the category of one more rad DIY thing I’m excited about learning.

Is there a second tour planned? Other countries?

Yes, I’m pretty much always touring, even locally. I’m going on a short trip to the San Francisco area in the beginning of December, and then the big plan is for another full scale US tour next year, then hopefully internationally in the second half of 2010.

You can view inside An Awesome Book on Dallas’s website. Also available to read is Dallas’s post on Huffington Post, as well as his interview with Graham Kolbeins on Future Shipwreck. Dallas and Graham both help author We Love You So, a blog of creative influences created around Spike Jonze’s rendition of Where The Wild Things Are. It’s a black hole of fun to get lost in.

You can purchase An Awesome Book direct from the Awesome World store.