It’s pie season. How does your dough do under pressure? 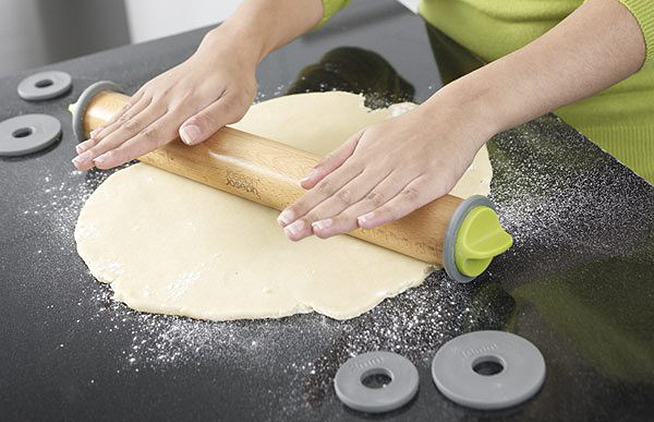 Admittedly, we’re not the best bakers. Well, I take that back—Jacob makes a mean pound cake and I’ve been known to do a very tasty molasses cookie, but when it comes to dough of the kneading and flattening variety, our attempts have been disastrous. Dough everywhere but in the pie pan.

That said, we know a clever idea when we see one and Joseph Joseph’s Adjustable Rolling Pin is precisely that. It’s wildly simple, and isn’t simplicity usually at the heart of great design?

No dough too thin

This kitchen tool is a beech rolling pin with three removable discs that raise the height of the pin in order to apply consistent pressure to the dough and achieve the thickness you want for your pastry, pie, pizza or pasta.

The discs attach to the ends, similar to weights on a barbell. They’re dishwashable and store attached so you don’t lose them. If you’re an especially precise chef (I’m so not there yet) there’s a ruler etched on the pin so you can measure your dough.

Joseph Joseph has been on a roll (ha!) since the company began in 2003. Founded by twin brothers Richard and Anthony Joseph—the former the business guy, the latter the design guy—they’re responsible for an impressive collection of contemporary kitchen gadgets that are brightly styled and pleasantly smart.

Doughn’t end up with thin, floppy pie crust. Get the Adjustable Rolling Pin for $19.95 from Amazon.

Also for sale at: